Frankly the age old debate about how to build in a historic neighborhood surprises, and even amuses me a little. It would seem natural that when we work on design for a new building, or any other industrial or graphic design, every new idea and the “brush stroke” should be informed by the context of the existing picture. It seems obvious that the goal for new design should be toward evolution of the current condition, and not a force for its destruction.

In architecture, and more specifically, in urban planning, each new element or new building should be developed in context and as a continuation of the specific living concept. It sounds easy enough, but this is where the heart of the problem lies: the definition of what the “living concept” and what “in context” actually means. This is especially important in the areas with a historic district status, where the main public interest goals are defined as preservation of the historic heritage.

I’ve been prompted to write on this subject by my current work on a design proposal for a new mikvah building located in a historic district of a small American town.  Here are some of my thoughts about the stylistic approach to the concept – how to design a new building without violating the nature of the existing environment, and at the same time to create a contemporary design without directly imitating the past. Another reason to write this article were the ongoing debates about the future of the Judicial Quarter area in St. Petersburg, Russia, the city where I had privilege to spent a third of my life.

I’d like to first bring up a few examples of existing world famous works of architecture that had to address the same questions. Then, I will highlight the reasons that in my opinion made these successful solutions.

I want to emphasize – First, we will focus only on the stylistic aspect, without analysis of the existing regulations and limitations. Second, in the framework of a short essay, we will highlight the main ideas and points that could become the basis for further discussions. 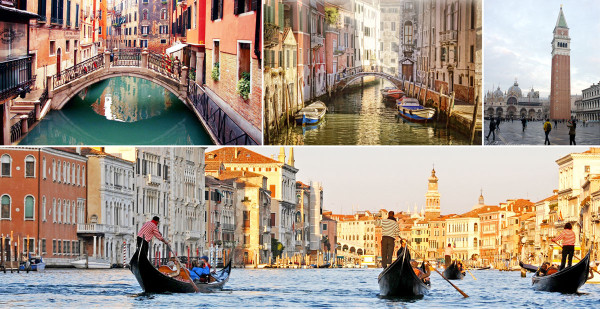 In a unique environment like Venice in Italy, or other museum cities like Machu-Picchu in Peru, there are no new building construction is allowed (as far as I know). The concept here is to preserve the city as a unique artifact, functioning in essence as a museum piece.

In the case of Paris, the interference with the existing urban fabric is limited but not impossible. When the new structure is constructed within the limits of the historic city it’s often rises to the level of absolutely revolutionary design, the level of significance worthy of the city as a trendsetter. The special context and history in this case; Paris is renowned for being a capital of taste and style and has always been open and not afraid of revolutionary experimentation.

Some European cities (like Rouen, pictured above), present evidence of the new structures built in a modern (contemporary) aesthetics, the constraints are applied to the scale and character that follows an existing pattern. New forms follow the existing rhythm and scale, replicating recognizable geometry in a new modern architectural language.  At the same time we can see how ultra-modern structures do get built in the suburbs.

One of the largest historic city centers in Europe, with about 7,000 registered historic buildings. The street pattern is largely unchanged since the 19th century since there was no major bombing during World War II. The center consists of 90 islands, linked by 400 bridges. One of the key elements is the canal ring that was established in the 17th century. So, similar to Rouen, new structures are designed in the context of scale, density and nature of the historic patterns. The aesthetic language echoes the language of the existing buildings characteristic.

It is difficult to find an architectural style that is not represented in Prague, from the Romanesque, to the modern High-tech and Deconstructivist styles. The biggest impact on the appearance of the city was the Gothic style. Therefore, the Gothic motifs can often be observed here in the buildings of other eras and styles.

An amazing example of the reconstruction of the whole city district in one of the most historically significant cities in the world is the reconstruction of the Jewish Quarter in the old city of Jerusalem. New buildings are not stylized to the old days and do not simulate an existing style.  The construction of the modern city streets and courtyards were subject to the characteristics of the scale inherent to the Middle Eastern cities. At the same time, the determining factor in the success of the new district was the choice of the traditional local construction material – stone. Moreover, the stone was not used as a finish but, as a structural material. Because the choice of material provides limitations for the design features, the resulting appearance of the new buildings fits extremely well in the historical fabric of the old city.  (For example – the narrow slits of windows or arched spans, in the case of large openings). And of course, as in many other successful examples – tremendous professionalism and talent of the designers, who undertook the stratospheric challenge.

The main determinant in the architectural context of the buildings of this city has always been the lack of any architectural context, except perhaps one – the famous Manhattan grid master plan with a clear dividing into blocks and standard sized lots. The style and character of a building is determined solely by financial capability, economic efficiency and customer’s aesthetic taste. However, since the second decade of the twentieth century, the city authorities began to establish its first building regulations and codes, governing some of the details. Fortunately the stylistic independence was preserved. The main characteristic hasn’t changed – stylistically every building completely ignores surrounding buildings. In terms of the design, the architect often ignores the basic parameters of the adjacent buildings.

Princeton is a very interesting example for us, because of the same scale and cultural similarity to the town where my mikvah is located. Every era is clearly represented with its own style structures, and at the same time most of the new buildings are done in respect to the context, and historical uniqueness, and beauty of this wonderful town.

So, in the examples listed above, we can see that the five basic conditions are met:

1. Scale. Perhaps the main condition – the building should fit and be respectful of the scale of the existing surrounding structures.
2. The density of the development. The new building, with a few exceptions, must fit into existing patterns without breaking its rhythms and character.
3. The architectural language of the era. Every time manifested in its aesthetic and cultural clews. The idea is that each city/community is a multi-layer cake; each temporal layer has its own flavor and stylistic ingredient.
4. The stylistic context. The new building should be respectful of an appropriate context, but designed by using of the architectural language of our time. The contextual character does not mean direct replicas. This may be a contrast, or certain building material typical for this area, or aesthetic components, such as the pointed gothic arch shape, replication the timber-framing, etc.
5. The composite and functional context. The role of composition in the new building stands in the context of the existing algorithm. It can serve as an accent, if, for example, it will build on the corner block or  formats the existing plaza. On the contrary, it may be understated as a background, if the given place located in the middle of the block, or next to an object that acts as the main focus.

In many smaller provincial cities in the US, the context presented by specific architectural styles, as Craftsman, Colonial, or Folk Victorian Style (where the key word is “Folk”, meaning – “not professional”). Having grown up in the framework of a kind of aesthetic paradigm of small towns and shopping centers with phony columns and attics, many Americans uniquely interpret architectural aesthetics. In response to my rough conceptual sketches for the small Mikvah-Chapel the walls of which were covered by ivy (which symbolizes the philosophy of mikvah as a part of nature where the visitors have come to dive into water, and at the same time reduces the apparent size of the new building), the client expressed his preference for the fake mansard to hide the slightly sloped “cement flat roof”. I must say that it was not surprising as this is a common facade style in the region. 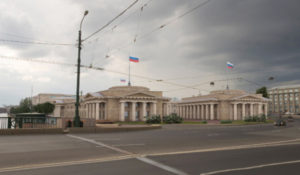 In the Petersburg’s competition mentioned above, I believe the context is a deep and peracute crisis of genre. And not just in terms of architecture, but of the culture, where folks look to the past as an ideal, where people do not believe in the success of new initiatives, where the pathological focus on the classics has more roots in psychiatry rather in psychology. Here, I would suggest to the term “Contempophobia” or “Contemporophobia” – the rejection of modernity and novelty. (Contemporary, from Latin – “Con” – together, “Tempo” – time; Phobia – “fear”).

This is understandable, especially in the case of one person or a small group of people who are passionate about classic or folk architecture, or something else. I am sincerely happy for my old university friend Maxim Atayants that he has a true love in professional sense. His winning project made at the highest level, albeit within rather in my opinion controversial paradigm.

However, I still believe that either extreme– trends based solely on the past or without any regard for context–is cause for serious alarm.

Imagine if the same mood of conservatism would prevail in St. Petersburg in early 20th century architecture, we would never have seen the wonderful Comedy Theatre or The House of Books (Singer House), or a variety of other interesting buildings in the city center in its interesting guise in which they exist today. And today, by the way, a lot of people in St. Petersburg’s professional circles consider the appearance of these buildings as a big mistake.
There would be no Eiffel Tower in Paris, not to mention the Centre Pompidou, Prague would not have had the famous Frank Gehry house, and in Jerusalem, instead of the Jewish quarter it would be adorned park with a flavor of cemetery.

So, to go over some of the basic concepts I have brought up – the city museum, the cozy and pleasant “shtetl” kind province, the living historical city – which continues to develop in accordance with the time and the role it plays in society. The secret of careful preservation of the environment is not to stop all vital activity, and not to build a randomly selected imitated style of the existing ones in the city. But with respect to the existing urban fabric to approach the design with the utmost care, following to the conditions listed above.

The best way to keep a historic heritage – is creating tomorrow’s heritage.

In conclusion, I want to say there is no universal and absolute recipe to what can and what cannot be built in a historical district. This question remains open for discussion. There may always be some exceptional circumstances in a given situation. Consistently one – when people are assigned to some place special status of the historic zone, it means that the contact with this site should be with extreme carefulness and delicate. In addition to the goal of preserving individual character of the site for generations, and emphasize this character, we need to do everything possible to make this place as pleasant and as interesting as possible.

9 thoughts on “New buildings in a historic neighborhood”