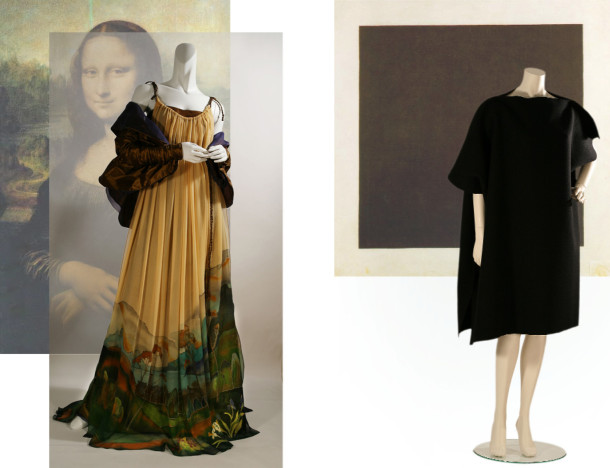 Often working in a team with architects, one sooner or later begins the discussion of whether laws of beauty and composition apply to all forms of art– including all forms of design, from graphic design to interior and industrial design, to architecture as a whole.

Of course, the language of expression always differs from media to media. In painting, form takes shape in a brushstroke, line, or just a blotch of color. In architecture, a wall, column, arch, or window will compose the whole. It can be a functional or decorative element– structural or accessory. The units of composition create rhythm and character, manipulating with a system of accents and supporting elements, to keep the attention of the viewer’s eye.

In this context I’d like to share an interesting conceptual work in which I was fortunate to participate in a few years ago. The theme was surprisingly far from architecture. We worked on a competition to design a dress, entitled “Inspired Art,” announced by Threads Magazine.

I must confess when looking at a woman’s gown I always found myself more interested in the clothing’s content rather than its form… so we decided to make the dresses that highlight the personality of the gown wearer, using compositional techniques founded by iconic artists in their best known works. At the same time we were hoping to demonstrate the universality in the laws of beauty and composition, and how art influences design in general.

Our small team prepared two pieces: “Mona Lisa” by Leonardo da Vinci and “Black Square” by Kazimir Malevich (accordingly –the first prize award and the finalist), Two iconic works of art, or rather their conceptual components, which are embedded in modern clothes.

The “Mona Lisa” – probably, most famous art piece of all time, actually marks the highest point of the Renaissance era where the lost secrets of the creation of classical form were revived, (the term ‘renaissance’ is derived from the French word meaning ‘rebirth’ or “revival”), and the first step forward from expressing just external shape to a deeper analysis of internal content or personality was taken.The landscape behind the Mona Lisa’s shoulders attracts the eyes of spectators, but instead, a cunning Leonardo blocks their views by an artless innocent female face, forcing the viewer to stare at the face, as he tries to see the beautiful scenery (or, in other words, the inner world). The play of light and shadow, the directing character of lines… Leonardo uses visual techniques to manipulate the viewer’s wandering gaze and guide it again and again to the most important area on a canvas – brings us to the face of our protagonist. In the end, the viewer looks at her as if spellbound. After all, and no wonder, so many incredible theories about her personality voiced for many centuries the life of this painting. In everyday life there is a popular expression: “enigmatic smile of the Mona Lisa.”The same methods were used in the creation of our gown. Painted scenery of the hem of the dress focuses the eyes and use of vertical silky drapery folds directs them to open the upper part of the chest (just the place that covers the palm when talking about the soul), and then further scans along the neck to the face. When the path of the eye’s movement slides down the hair, it stops at the pleated satin capes, redirecting the viewer back to the chest and face. Each time escaping eyes will cling to the folds and the shiny and dark brushstrokes of the landscape, then back to the object of our attention: the person individuality, robed in the compositional game.

“Black Square” is ostensibly the antithesis of the alleged Mona Lisa. There are no intriguing dynamics of line and color yet there is some hint of reality. There is no form at all, only the light absorbing, deep, gloomy emptiness… meaning that now is the time to no longer reflect on form and form alone but rather upon what is happening in that pitch darkness. That being said, Malevich is still an artist and he would never abandon form. By “Denying” the shape and shifting attention to the content, he simply made steps toward the search for new forms for transmission of the same content itself.

When the audience’s gaze finds nothing interesting it wants to slip out of the canvas, four clear of a square border, untied with the whole arsenal of tone and power lines that make one look back inside. Not finding anything again, the viewer wonders. And so there is another mystery, which causes no less controversy and rumor. But the question is no longer about a specific person, as it was with Leonardo’s piece-who is she? Mona Lisa de Gioconda, or some Pachifica Brandani, the mistress of Giuliano de’Medici (some parts of the landscape hint about that), or perhaps a portrait of a young student and lover of the artist? Or is it a coded self portrait of the great genius himself? Rather the question of “Black Square” is one of a much more abstract nature-that of a Sorcerer if you will. Malevich’s work can serve as the perfect poster at a conference on theology, science, art or even politics and other discussions of modem mysteries.

One of the most important concepts inherent in the “Black Square” is the surprise and novelty of the idea. This is a general attribute of the movement which we call modem art. The whole point of its occurrence was created when the development of the realism movement was trapped by the tremendously high level reached by the French salon. With photography already having been invented, reflected reality art emerged into seeking new horizons where the natural attractiveness assessment criterion could develop an underlying “Surprise me” moment for viewers. Moreover, the picture, concise and restrained, showing a black empty field, illustrates the inexhaustible depths within that are unexplored and undiscovered. 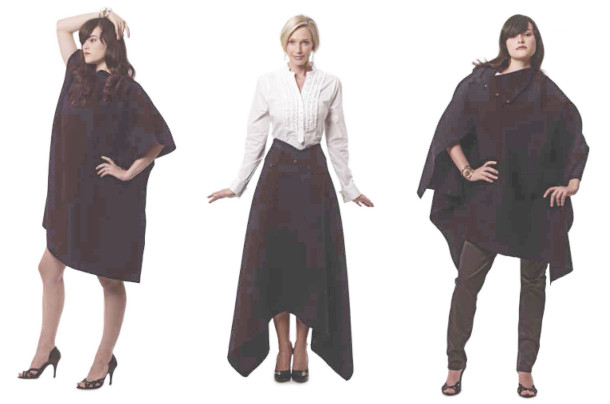 The appearance of the “Black Square” by Malevich, didn’t certify the end of European Art, as some zealous advocates of classical forms are asserting. Simply a journey of 400 years was just concluded. From Leonardo we can count time when the artists went into the inner world of their subjects using the revival of the classic forms of the Renaissance. “Black Square” marked the beginning of the era of the search for and creation of, radically new forms of transmitting the eternal inner content.

Like both of these iconic and dare I say, revolutionary products, our competitive replicas pursue the same idea; not to focus on the form of the women no matter how attractive and sophisticated they are, but rather on their inner world using the same compositional and formalistic techniques. A woman of mystery in the “Black Square”, where light absorbing, dense fabric hides but does not emphasize the shape, intrigues and capture’s one’s attention. And the woman awaits, half hidden behind the landscaped folds of her light, airy gown (dutifully painted by artist Yelena Akhumova as a replica of Leonardo’s Mona Lisa landscape) In the end the viewer looks at the idea rather than the external form of the original image.

Notably, losing in the finals to “Mona Lisa”, “Black Square” was awarded a separate article in the Threads Magazine (Apr/May 2008), where a photo of a model reminds us of Leonardos’s famous “The Virtual Man”. While the artists apparently chose this posture unconsciously, it emphasizes the path of contemporary art from Leonardo to Malevich as a path to excellence and depth; the path to the inside, where content and form are one inseparable cycle.

In the actual dresses there is a lot which is interesting, for example, wonderful things like multifunctionality and diversity, which can be seen as the basis for many independent story lines. But today I have only written about the part of the work which has to do with concept. That being the clearly articulated and consciously chosen methods of expressing a certain idea. In this case the idea is one of using techniques found in the fine arts in the design of clothing; i.e.: identifying the most important qualities and moving secondary qualities to the wayside. That is the technique inspired by art.

(End of part 1. In the next post we will see how these principles work in the examples of other well-known works, as well as an example of architecture).

One thought on “The “Inspired by Art” competition. From Leonardo to Malevich -The Concept and Composition in the design world (part 1)”